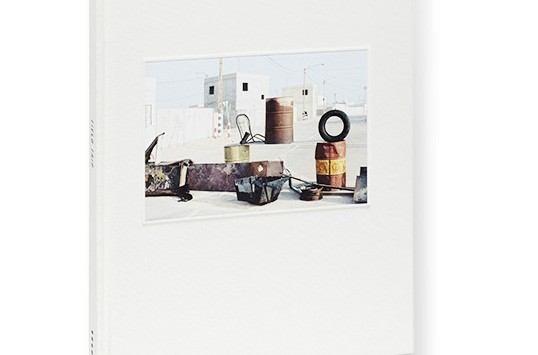 Field Tripestablishes an opaque representation of the life and landscape of Israel. Military presence looms heavily and the images are punctuated with anxiety. Butchered animals combine with uncertain portraits of Israeli residents and leave the viewer unclear where the military landscape ends and the civilian land begins.  The work in Field Trip is just that – the result of a trip, an investigative and inquisitive one, tinged with paranoia, the result being a beautiful, stark, often humorous and complex photographic diary of a well-trodden land. This traumatic album epitomizes frontline photography.

Field trip is part of a project entitled This Place, which explores the complexity of Israel and west Bank trough the eyes of twelve internationally acclaimed photographers, their highly individual works combining to create not a single, monolithic vision, but rather a diverse and fragmented portrait, alive to all the rifts and paradoxes of this important and much contested place.

Martin Kollar - was born in Zilina, Czechoslovakia (now Slovak Republic). He studied at the Academy of Performing Arts Bratislava and has been working as a freelance photographer and cinematographer since he graduated. He has received several grants and awards, including the Fuji Film Euro Press Photo Award and the Backlight Photography Award in Finland. His work has been exhibited across the world, including Maison Europeen de la Photography Paris, France, Rencontres d’ Arles in France, MOCA Shanghai China, Guandong Museum of Art in China and Krakow Photomonth. He has published three photography books, Nothing Special (2008); Cahier (2011); Field Trip (2013).

Adam Mazur – critic, art historian and American studies specialist, teaches at the University of Arts in Poznań. In 2002-2013 curator at Centre for Contemporary Art Ujazdowski Castle, including the exhibitions Nowi dokumentalisci, Efekt czerwonych oczu, Schizma, Świat nie przedstawiony, and behind many exhibitions held in Poland and abroad. His books include Kocham fotografię, Historie fotografii w Polsce 1839–2009 i Decydujący moment. Nowe zjawiska w fotografii polskiej po roku 2000.  Editor of exhibition catalogues. In 2004-2011 editor of Obieg magazine, and since 2013 editor of Szum magazine. Publishes in domestic and international press. Together with Łukasz Gorczyca, he is carrying out a research project devoted to Polish photography books (polishphotobook.tumblr.com).