Does a photographic image have the potential to have an effect on the senses other than sight? Can it engage the nonvisual areas of human cognition, such as touch, sound, smell, heat or spatial experience? These are the questions that Jakub Woynarowski's curatorial project Echoes, part of this year’s Experimental Section, will be seeking to answer.

The works of Polish artists, including projects prepared especially for the exhibition by Łukasz Jastrubczak, Igor Omulecki and Janek Simon, will be presented at Bunker Sztuki. We will also see pictures captured in the form of a visual diagram from around the world, specifically from areas often perceived as the margins of “typical” photography (by blind people, recording images without a camera, and technological experiments from the limits of science). The gallery will also house a performance activity zone, devoted to various methods of visualisation of knowledge and attempts to translate verbal messages into visual ones. This will allow visitors to the exhibition to participate in unconventional lectures and projections and become familiar with diverse intriguing forms of visual and sonic narrative. A further important aspect of the exhibition will be a fully darkened workshop space intended for photographic experiments conducted without the sense of sight.

The Echoes project aims to test to what extent abandoning close control over the process of creating an image through the medium of sight can stimulate an intensive reception of reality and more creative formation of the language that describes it. The ideas tackled by the exhibition also lead to universal contemplation on the nature of the photographic medium and human perception.

Jakub Woynarowski combines the activities of an interdisciplinary artist, designer and independent curator. He is a graduate of, and a lecturer at, the Academy of Fine Arts in Krakow. A co-author of books that are situated between visual theory and practice, he is also the creator of the artistic project for the Polish Pavilion exhibition at the 14th Venice Biennale of Architecture in 2014. He cooperates with Korporacja Ha!art. 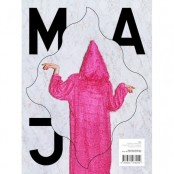