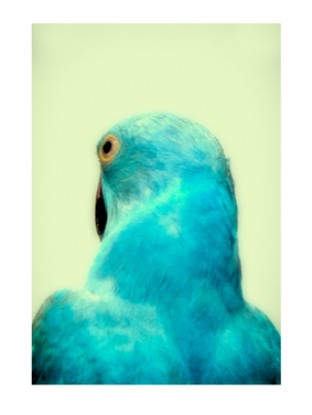 Monika Krzynówek, Untitled 1, from the series Chelsea Girls, 2014.
The title of Monika Krzynówek’s series is an allusion to the experimental 1966 film Chelsea Girls. At first glance, the link between photographs of budgerigars and Andy Warhol’s stories from the daily lives of women living in the Hotel Chelsea in New York seems to be a distant one. The only element that directly refers to the pop art narrative is the pastel backgrounds that run through the series of passport photos.

The artist obsessively preserves the birds on film, turning the rigid rules of portraiture on their head by showing them from behind. She widens the field of interpretation, unafraid to expose what is on the other side of the camera. In some of the photos we can make out human fingers holding the budgies. The trapped birds turn away, and their expressions could be an image of fear. The ostensibly calm and aestheticised typology turns into an emotional record, in which the models become the victims of violence. And it could be this aspect that comes closest to the heroines of Warhol’s film.


Monika Krzynówek (born 1987, Kraków)
Photography student at the University of Arts in Poznań. A graduate of the Academy of Photography in Krakow, where in 2012 she received a distinction upon completing her degree with a piece called koincydenty under the guidance of Paweł Bownik. A participant in the immediate photography show Blisko / Close (Krakow, 2013).