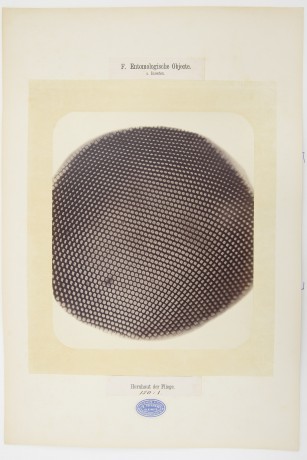 Wilhelm Beermann, Eye of a Fly, 1870. Courtesy of the Museum in Gliwice
“What if the divides were to be taken away from objects and photographs? If we mixed together that which seems fixed, belonging to other orders?” This is the question posed by Wojciech Nowicki, curator of the exhibition Radiation, pointing to the definitions and classifications into which photographic images are forced.

In his book An Anthropology of Images. Picture, Medium, Body (Princeton, 2014), Hans Belting lists four independent modes in which photography operates: definitional or informational photographs, advertising, homely or emotional, and artistic. André Rouillé’s La Photographie. Entre document et art contemporain (Photography. Between Document and Contemporary Art – Gallimard, 2005) mentions many more. Despite these attempts to capture the features of the photographic image, Radiation does not stress the divides, but rather highlights the vagueness of the boundaries and identifies points at which they are crossed.

The exhibition will present a collection of photographs from diverse sources which are used as a tool in various fields of research or experiments – for example natural sciences, genetics, pathology and medicine. The visual essay created by Nowicki on the gallery walls analyses how these photos, when juxtaposed with others that are remarkably similar visually but produced (or appropriated in an artistic gesture) by photographers or artists using the medium of photography, take on new meanings. As the curator says, “By putting various genres that are usually kept strictly separate on equal terms, even for a moment, we are able to look at them more attentively, discover how they really differ, and what is just a superficial difference.”

Wojciech Nowicki is a curator of photo exhibitions, a writer, and a member of the Krakow Photomonth board. He is the author of Dno oka. Eseje o fotografii [Bottom of the Eye: Essays on Photography], Jerzy Lewczyński: Memory of the Image, and Niepokoje Wilhelma von Blandowskiego [The Confusions of Wilhelm von Blandowski], among other titles. He is currently working on a collection of essays devoted to portraiture in photography. He has curated retrospective exhibitions of the work of Jerzy Lewczyński, Wilhelm von Blandowski, and Michał Greim, among others, and was a co-curator of the exhibition Archiwum Centralne (Krakow Photomonth 2009).