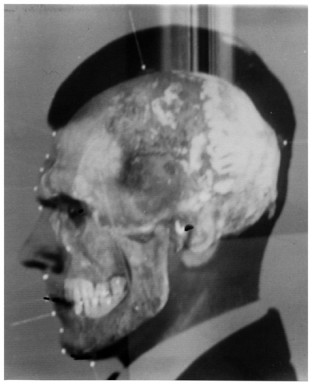 Face-Skull Superimposition of Josef Mengele, Medico-Legal Institute labs, São Paulo, 1985. Courtesy of Maja Helmer
“To the untrained eye, bones look similar – skulls are devoid of the expression and the gestures of a human face,” write Thomas Keenan and Eyal Weizman in the book Mengele’s Skull (Frankfurt am Main, 2012), going on to compare the marks that life leaves on a human skeleton to the exposure of photographic film to light. Work, place of residence, eating habits, experience of violence – all these make imprints which a specialist can use to create a picture of a given person’s life, interpret their “osteobiography”.

In 1985, the body of Josef Mengele was exhumed in Brazil. The identification process proved to be a turning point in the history of prosecution of perpetrators of crimes against humanity. Whereas previously prosecutors had relied on documents and witness testimonies, the crucial factor here turned out to be analysis of human remains and use of photographs and the latest imaging techniques.

The exhibition Forensic Aesthetics shows how, starting from the identification of Mengele’s remains, human bones – and more recently also DNA samples and satellite photos – have become key evidence in enquiries involving genocide and war crimes. The curators aim to answer the question of what role imaging techniques and methods of representation play in processes related to crimes and politically motivated acts of violence. They also analyse the procedures and methods used in criminology, as well as the mutual relations of science, politics and the media.

Thomas Keenan teaches media theory, literature, and human rights at Bard College, where he directs the Human Rights Project and helped create the first undergraduate degree program in human rights in the United States. He is the author of Fables of Responsibility (Stanford University Press, 1997), and, with Eyal Weizman, Mengele’s Skull (Sternberg Press / Portikus, 2012). He is co-editor, with Wendy Chun, of New Media, Old Media (Routledge, 2006), and, with Tirdad Zolghadr, of The Human Snapshot (LUMA/Sternberg/CCS Bard, 2013).

Eyal Weizman is an architect, professor of spatial and visual cultures, and director of the Centre for Research Architecture at Goldsmiths, University of London. Since 2011 he has also been directing the Forensic Architecture research project as its principal investigator. His books include The Least of all Possible Evils (Verso, 2011) and Hollow Land (Verso, 2007).