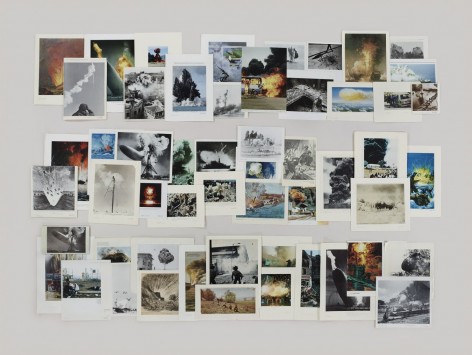 Taryn Simon, Folder: Explosions, 2012 © Taryn Simon. Courtesy of the artist and Gagosian Gallery
Research methods and thorough examination of library materials are an important part of Taryn Simon’s art. The project The Picture Collection, a section of which will be shown within the Krakow Photomonth Main Programme, was inspired by the collection of New York Public Library.

Exploring this huge pictorial archive – photos, postcards and posters – the artist carried out a detailed analysis of the rules that govern it – the way that images are classified and methods used to catalogue them. By juxtaposing iconic photos and completely anonymous pictures, Simon enquires about the hierarchies and categories given to materials for the purposes of working with them, on an ostensibly neutral basis.

Taryn Simon’s artistic medium consists of three integrated elements: photography, text, and graphic design. Her works demonstrate the impossibility of absolute understanding and investigate the space between text and image, where disorientation occurs and ambiguity reigns. Simon’s works have been the subject of monographic exhibitions at the Ullens Center for Contemporary Art, Beijing (2013); the Museum of Modern Art, New York (2012); Tate Modern, London (2011); the Neue Nationalgalerie, Berlin (2011); and the Whitney Museum of American Art, New York (2007). Permanent collections include the Metropolitan Museum of Art, Tate Modern, the Whitney Museum of American Art, Centre Georges Pompidou in Paris, and the Museum of Contemporary Art, Los Angeles. Her work was included in the 54th Venice Biennale, in 2011, and the Carnegie International, in 2013. She is a graduate of Brown University and a Guggenheim Fellow. Simon lives and works in New York.