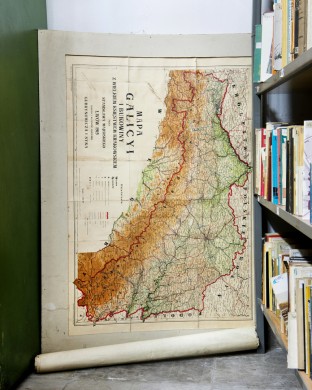 Aaron Schuman, Untitled (#01), from the FOLK: A Personal Ethnography series, 2014 © Aaron Schuman
Franciszek Feret - the great-grandfather of the curator and artist, Aaron Schuman – was born in Galicia in 1878. In 1900, at the age of 22, he emigrated to the United States. Schuman never met his ancestor, and before visiting the Ethnographic Museum in Krakow he knew little about Polish tradition or customs, apart from a few traditional Polish recipes and one or two family keepsakes passed down from generation to generation. In Folk: A Personal Ethnography Schuman explores the Ethnographic Museum in Krakow – and the customs and culture of ethnography itself, as represented by the museum - via his own personal history.

Schuman’s exhibition focuses on the regional and cultural heritage of his own family – as well as that of the Ethnographic Museum itself – and the ways in which these are represented and archived within the Museum. The curator’s family history plays an important role here, but the exhibition is also an examination of the Ethnographic Museum’s own practices over the last century, as well as its mission as “a centre of reflection and understanding of ourselves and others”.

Aaron Schuman is an artist, writer, editor, and curator. He exhibits both his photographic and curatorial work internationally, and regularly contributes articles, essays, and interviews to a wide range of books and publications, including Aperture, Foam, TIME, Photoworks, HOTSHOE, the British Journal of Photography, and more. Schuman is also a Senior Lecturer at the University of Brighton and at the Arts University Bournemouth, and is the founder and editor of SeeSaw Magazine (www.seesawmagazine.com).